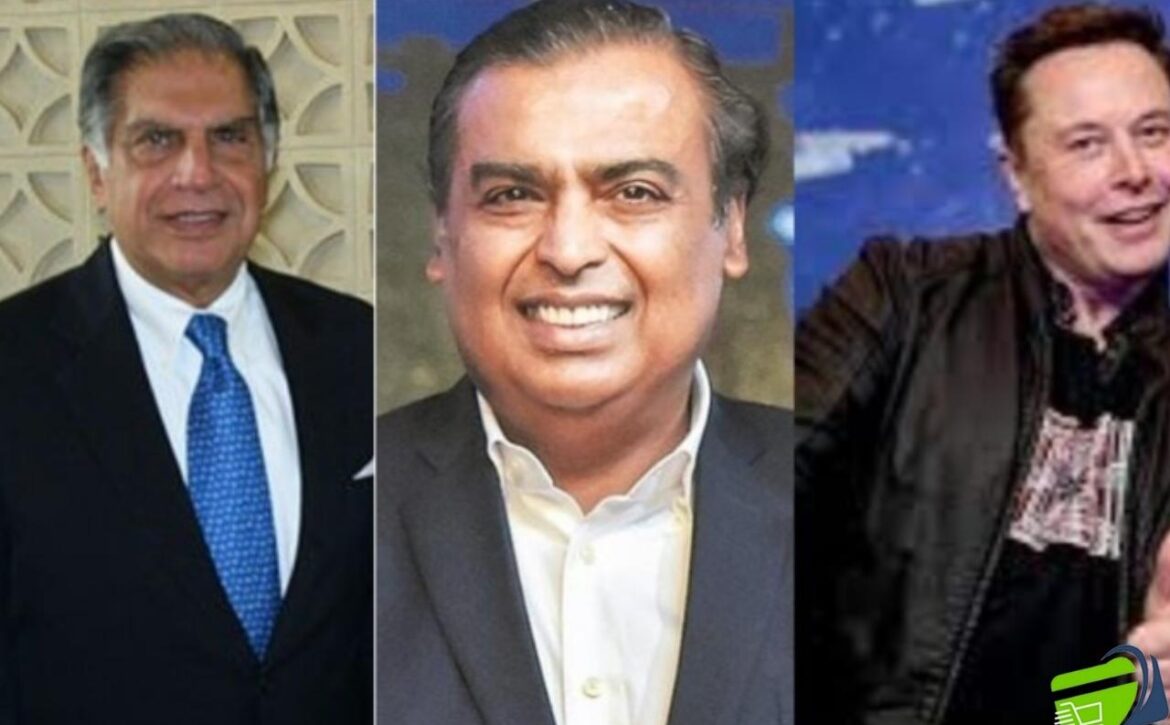 Who is better , Ratan Tata , Mukesh Ambani, or Elon Musk?

When we think of our country’s wealthiest industrialists, the names Ratan Naval Tata and Mukesh Ambani immediately come to mind. Furthermore, almost no one is unfamiliar with Elon Musk, the world’s richest person.

Ratan Tata, an Indian business magnate, is unquestionably one of our country’s most adored and beloved figures. In addition to having an outstanding commercial vision and being a generous philanthropist, he is a fantastic humanitarian who is not corrupted by his fame or success.

Elon Musk is well-known because he is the world’s richest person, with a net worth of $268 billion. Gautam Adani and Mukesh Ambani are well-known for being India’s wealthiest individuals. But everyone is familiar with Ratan Tata for a different reason. It does not imply that he is not wealthy; however, he is better known for his philanthropic and humanitarian efforts than for his wealth.

When it comes to wealth, name, and fame, Ratan Tata, Mukesh Ambani, and Elon Musk are all well known for their great work and success in their respective fields, but there are a few reasons why Ratan Tata tops the list of most followed Indian billionaires.

Ratan Naval Tata (born 28 December 1937) is a former chairman of Tata Sons and an Indian industrialist. He was the chairman of Tata Group from 1990 to 2012, and again as interim chairman from October 2016 to February 2017, and he is still the chairman of the company’s charitable trusts His net worth is estimated to be one billion dollars.

Mukesh Dhirubhai Ambani is an Indian business magnate who was born on April 19, 1957. He is the chief executive officer of Reliance Industries Limited , a Fortune Global 500 company and India’s most valuable company by market capitalization. According to Forbes and Bloomberg Billionaires Index, Ambani’s net worth is estimated to be US$95.7 billion as of September 6, 2022, making him Asia’s second richest person after Gautam Adani and the world’s eighth richest.

Elon Reeve Musk, born on June 28, 1971, is a business tycoon and investor. He is the founder, CEO, and chief engineer of SpaceX; the angel investor, CEO, and product architect of Tesla, Corporation; the founder of The Boring Company; and the co-founder of Neuralink and OpenAI.. According to the Bloomberg Billionaires Index and Forbes’ real-time billionaire list, Musk has an estimated net worth of around $238 billion as of September 26, 2022.

The richest man at heart does not require any reliance; however, Mr. Tata has personal investments, in his various foundations that work day and night to transform the world and way of life. Given his current performance and the company’s and individual’s annual growth, we can be confident that his net worth will increase in the coming years.

Do you want to know the list of Mukesh Ambani’s businesses? Well, you’ve come to the right place. Mukesh Ambani owns Reliance Industries, which has a petrochemicals division, an oil and gas division, and a telecom and retail division.

Mukesh Ambani is the CEO of all four divisions and is responsible for 80% of the company’s revenue. His brother, Anil Ambani, receives the remaining 20% of the payment. His father, the late Dhirubhai Ambani, started as a yarn trader in 1966 and eventually built one of India’s largest conglomerates with over USD 100 billion in assets. Mukesh Ambani has established a new green energy division. The division includes oil refining units, retail, and telecommunications.

Elon Musk is best known as the co-founder and CEO of Tesla, which he assisted in establishing in 2003. Since then, the automaker has developed seven electric vehicle models, four of which are now in production. Here are all of Elon Musk’s companies and what they do, from digging tunnels to creating brain implants.

Nodoubt Elon Musk and Mukesh Ambani have left people speechless with their brilliant minds and contributions to increasing employment opportunities in our country, but no one is unaware of the notable achievements made by the great personality Ratan Naval Tata, who is the most followed Indian billionaire simply because of his humanity and the number of charitable organizations he runs.

The greatest man has repeatedly won the hearts of the people for his contributions to our country and for making it a better place. The Tata Group of India’s owner also demonstrated that being on the Forbes list does not make one wealthy, but using wealth for the benefit of society does.Ratan Tata once said,

None can destroy iron except its own rust!

Similarly, no one can destroy a person, but his own viewpoint can!

This man, who has worked his way up from the bottom to the top of the Tata Group, needs no introduction; he is none other than Mr. Ratan Tata.

Here we present a list of Ratan Tata’s contributions that distinguish him from others in society.

According to the India Infoline Finance Limited Wealth, Hurun India Rich List 2022, there are 433 Indians richer than Ratan Tata. Ratan Tata and his family have been involved in charitable activities since the company’s inception. He has made numerous contributions to India’s development, including hospital facilities and school reform.

Ratan Tata is not on the Billionaire Club list because charitable organizations own 65% of TATA Sons, the key holding company for the other 96 TATA Group companies. As a result, Ratan Tata’s 65% ownership of Tata Sons Limited is reflected in the various charitable organizations rather than in his financial statements. The Tata charitable trust is the largest trust in Indian history. These are a few reasons why he is not on the list of the world’s richest billionaires

Great deeds and remarkable contributions to charitable organizations in India and the development of the country are a few of the reasons Ratan Tata was unable to become the world’s richest person; otherwise, he would have become one of the world’s richest billionaires. We all salute this great individual for making significant contributions to the development of this country.

Coming together is the first step,

Staying together is the next step,

Working together is the ultimate goal.